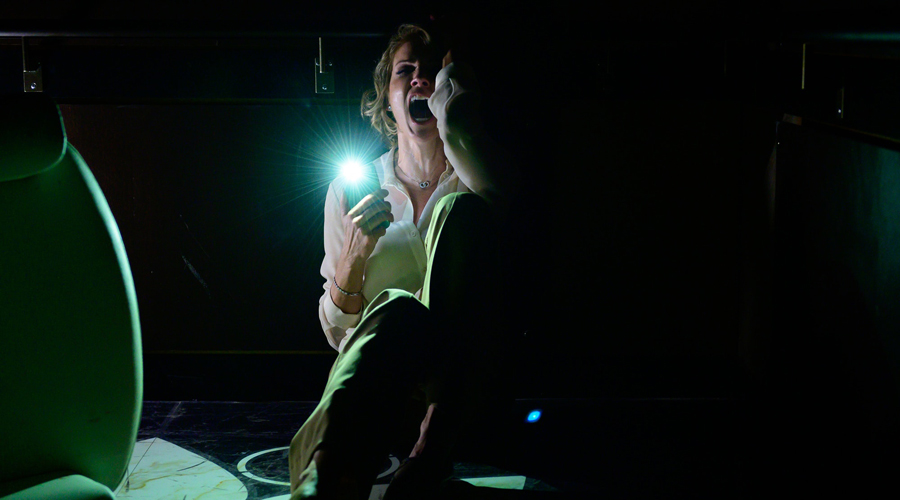 Shudder is ringing in Halloween with the return of their original GHOUL LOG as well as the debut of a new GHOUL LOG for 2019 created by indie horror icon Larry Fessenden.

Oh, yeah, and they have a host of ghoulish premieres to get you in the mood for Halloween as only Shudder can.

From showrunner Greg Nicotero (​The Walking Dead​) comes a new Shudder Original anthology horror series based on the iconic 1982 film written by Stephen King and directed by George A. Romero.

Based on the “creepypasta” short story “Hidden Door” by Charlotte Bywater, Channel Zero: The Dream Door follows newlyweds Jillian (Maria Sten) and Tom (Brandon Scott), who have each brought secrets into their marriage. When they discover a strange door in their basement, those secrets start to threaten their relationship — and their lives. With Steven Weber, Steven Robertson and Barbara Crampton, directed by E.L. Katz (Cheap Thrills).

Rebellious high school students Kayla and her best friend Maddie find themselves abducted by a sinister presence and stalked, along with six other women, by men in terrifying masks. Starring Airlie Dodds, Linda Ngo and Taylor Ferguson, directed by Tony D’Aquino. A SHUDDER EXCLUSIVE (Also available on Shudder Canada)

In this stark and atmospheric tale, Gwen is a young girl struggling with her mother’s mysterious illness, her father’s absence and the suspicious local community that has turned on them. Somehow Gwen must find the strength to guide her family through the darkness and overcome the evil that is taking grip of her home. Starring Maxine Peake, Eleanor Worthington-Cox, and Richard Harrington, directed by William McGregor. A SHUDDER ORIGINAL (Also available on Shudder Canada)

From producer Eli Roth and written and directed by the writers of ​A Quiet Place​. On Halloween, a group of friends encounter an “extreme” haunted house that promises to feed on their darkest fears. The night turns deadly as they come to the horrifying realization that some nightmares are real. Starring  Katie Stevens, Will Brittain and Lauryn Alisa McClain, directed by Scott Beck, Bryan Woods.
A SHUDDER EXCLUSIVE (Also available on Shudder Canada)

In this twisted horror anthology directed by a killer lineup of genre legends, five strangers are drawn to an abandoned theater and forced to watch their deepest and darkest fears play out before them. Lurking in the shadows is the Projectionist, who preys upon their souls with his collection of disturbing films. As each reel spins its sinister tale, the characters find frightening parallels to their own lives.​ Starring Mickey Rourke, Richard Chamberlain and Adam Godley, directed by Alejandro Brugués (Juan of the Dead), Joe Dante (​Gremlins), Mick Garris (The Stand​ miniseries), Ryûhei Kitamura (The Midnight Meat Train) and David Slade (B​lack Mirror: Bandersnatch). A SHUDDER EXCLUSIVE (Also available on Shudder Canada and Shudder UK)

Set the mood for your Halloween festivities with Shudder’s 24/7 feed of a candlelit Jack-o’-Lantern accompanied by spooky night noises that does for Halloween what the famed Yule Log does for Christmas. Fan favorite The Ghoul Log is back, accompanied by an all-new, creepier sequel handmade by genre icon Larry Fessenden (Depraved, Habit, Until Dawn).

Shudder is whipping up a very special Halloween treat that will keep you up into the wee hours. Details coming soon.

After months of searching, Mia has found the perfect subject for her PhD thesis film on Alzheimer’s Disease.  For the next several months, cameras will record the everyday life of Deborah Logan and her daughter, Sarah. Mia and her crew will document the physical effects the disease on Deborah, and the emotional and mental toll it takes on Sarah, her primary caregiver. As they begin the filming, the cameras record Deborah and Sarah’s day-to-day activities, with Mia noting the telltale signs of the progressive disease.  As the days progress, strange things begin to happen around Deborah that are not consistent with any findings about Alzheimer’s. Something else has taken control of Deborah’s life, an evil threatens to consume anyone and everyone who try to stop it. Starring: Jill Larson, Anne Ramsay, Michelle Ang

A woman works the late shift at “The Gas Station” while a killer is on the loose. A man can’t stand the thought of losing his “Hair” and he’ll do anything to keep it. And finally, a baseball player submits to an “Eye” transplant after he loses an eye in a car accident. Starring: John Carpenter, Stacy Keach, Mark Hamill, Tom Arnold, Wes Craven, Sam Raimi, Roger Corman (Also available on Shudder Canada)

Ever After (Director: Carolina Hellsgård)

Post apocalypse Europe, two years after zombies have overrun Earth, only two citadels of civilization remain in the East German towns of Weimar and Jena. In Weimar, newly infected zombies are shot on site without mercy. The Jena authorities take a more humane approach by trying to find a cure for plague victims. Vivi and Eva, in search of a more humane world, are stranded in the no-mans land of the Black Forest where they have to rely on each other and nature in order to survive. But their survival has also unleashed demons from their past that they must confront. Starring:

In the mid-‘90s, Dario Argento approached a physically and professionally ailing Lucio Fulci to direct one final production, an over-the-top shocker about grisly murders at a Paris wax museum. But when Fulci passed away only weeks before filming was to set to start, Argento turned to Sergio Stivaletti – the FX genius on PHENOMENA, OPERA, DEMONS and CEMETERY MAN – to make his feature-directing debut. Starring: Robert Hossein, Romina Mondello, Riccardo Serventi Longhi, Gabriella Giorgelli, Umberto Balli (Also available on Shudder Canada)

Land surveyor Eric travels to a remote, unnamed Irish woodland to assess its suitability for a new development project. However, not all is as simple as it seems on this assignment. Intrigued by the woods’ foreboding mysticism, Eric finds himself drawn into a dangerous game that could lead to him becoming a prisoner of this place without name. Starring: Alan McKenna, Niahm Algar,James Browne, Brendan Conroy (Also available on Shudder Canada)